In October 2013 in the design issue, a Finnish home decor magazine "Avotakka" wrote a story about the Olive Green Window. The article was not publicly available online, so we promised to find out whether we could blog the story.

And here it is! Since the story is in Finnish, we have also provided a rough English translation, which probably don't do justice for the original text but we hope you get the idea. So, please, enjoy "Ikonien keskellä" - "Surrounded by icons"!

In Pekka and Minna's townhouse every piece of furniture and decorative item is a carefully selected collectible. However, in their opinion even a design home can't feel like a museum.

Caption 1: Designed by Paolo Piva in 1981, the Alanda table is an exception in interior design, which is mostly from 1950's. The chairs with metal legs by Charles and Ray Eames are from 1946.

Caption 2: Eames Lounge Chair and Ottoman from 1956 are from the first small production series. The light fixture with a black top is designed by Leo Rutjens. A graceful sofa is called a Toot and designed by Piero Lissoni. 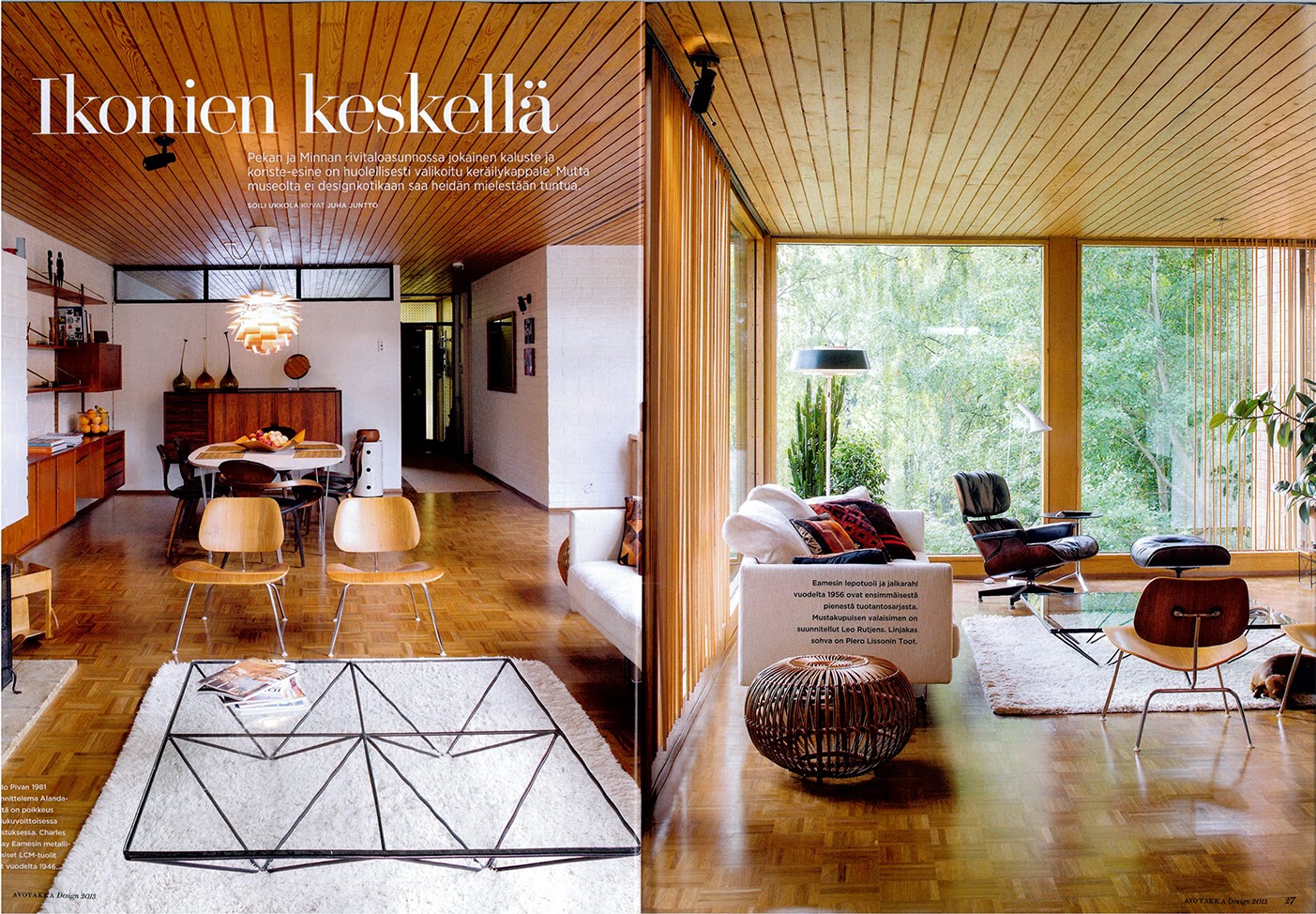 Caption 4: For more than a year, Pekka hunted the chairs by Norman Cherner before he found six matching ones from different locations in US. The bookshelf by Poul Cadovius was found from an auction. 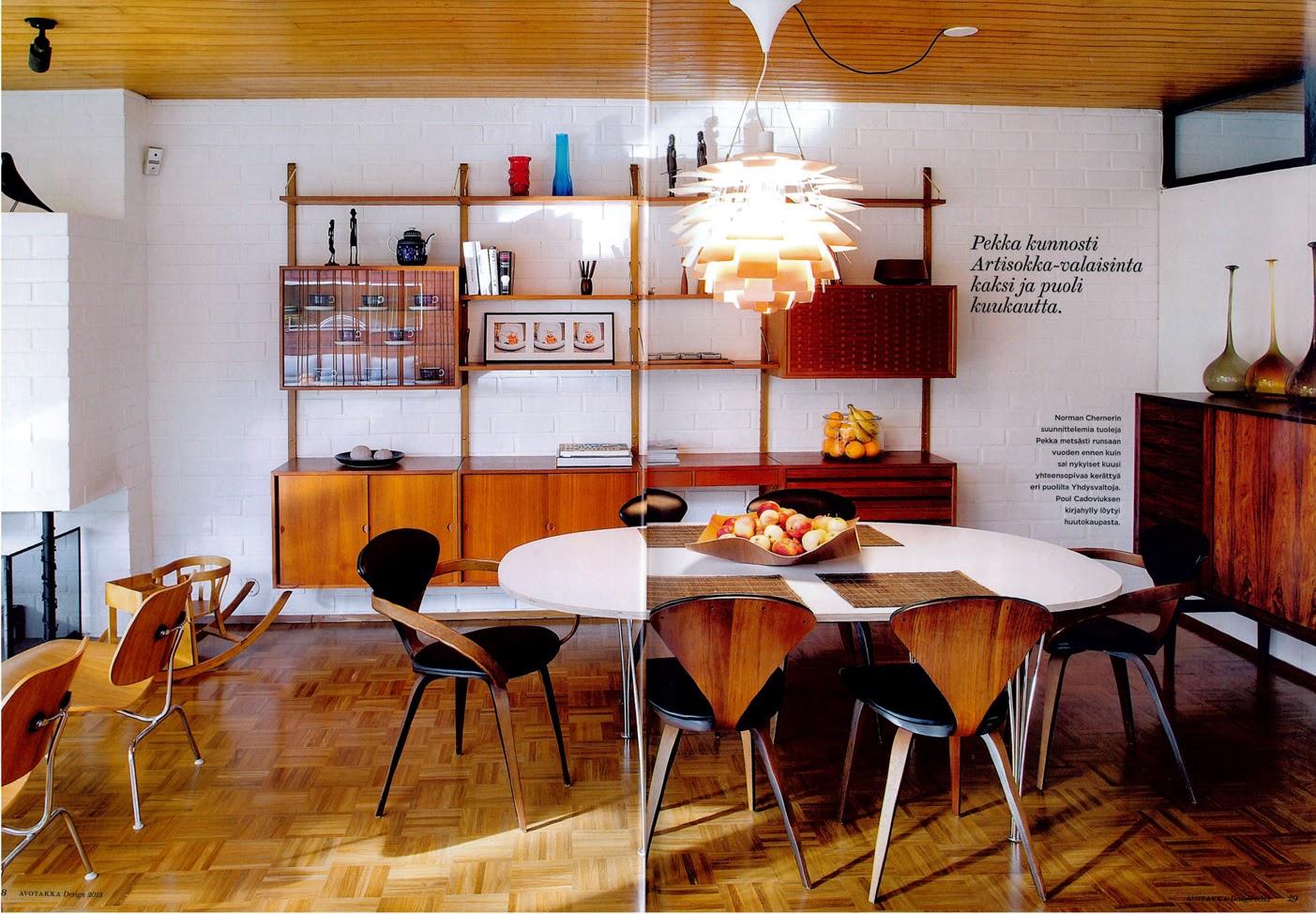 The list is overwhelming and seems endless. Charles and Ray Eames, Poul Henningsen, Arne Jacobsen, Poul Cadovius, Norman Cherner... Adding the launch years and manufacturers of each item, and including trivia such as the changes made in different pieces including for example the thickness of veneer or alterations of screw stubs.

Pekka Kumpula is a walking design data source. Effortlessly he lists the details of his home, which is not a surprise as each piece of furniture, lighting and decorative item is a hand picked collectible. Almost everything has been designed and manufactured in the end of 1950's.

- I am the one who has a lot to learn. Luckily, we share the same taste with Pekka, says Minna Allinen.

Sofi, who is about a year old, yet lacks an opinion regarding the style of her home.

Pekka and Minna spent about two years finding their home. They were looking for an apartment representing 1960's modernism, in as original condition as possible.

Now the family has lived in their townhouse designed by Osmo Lappo in 1962 in Espoo Finland for about two years, first a couple of months without a kitchen or shower. The building still has many of the typical characteristics for this era, such as windows from floor to ceiling, atrium terrace, clear division of space and horizontal lines which accentuate openness.

Typical to the era, Lappo aimed to fade the border between the interior and exterior, and bring the nature close to people to be enjoyed. A gently sloping roof was designed to allow the sun to light up the terrace during the afternoons.

The 119.5 square meters in upstairs have been renovated nearly without any professional help. The red tile walls were painted white. The ceiling made of pine boards was decided to keep unchanged, to match the wood colored parquet.

Caption 5: Minna Allinen helps daughter Sofi to eat. The light fixture over the table is a Paavo Tynell.

Caption 6: Pekka Kumpula sitting in a Bubble chair designed by Eero Aarnio. When winter arrives it will be moved from the atrium terrace to downstairs.

Caption 7: Something new. Puupalvelu Rajala manufactured the kitchen cabinets designed by Pekka. On top of the veneer covered drawers there is a thin Corian counter top. Sliding doors hide the wall cabinets and an effective extractor hood. 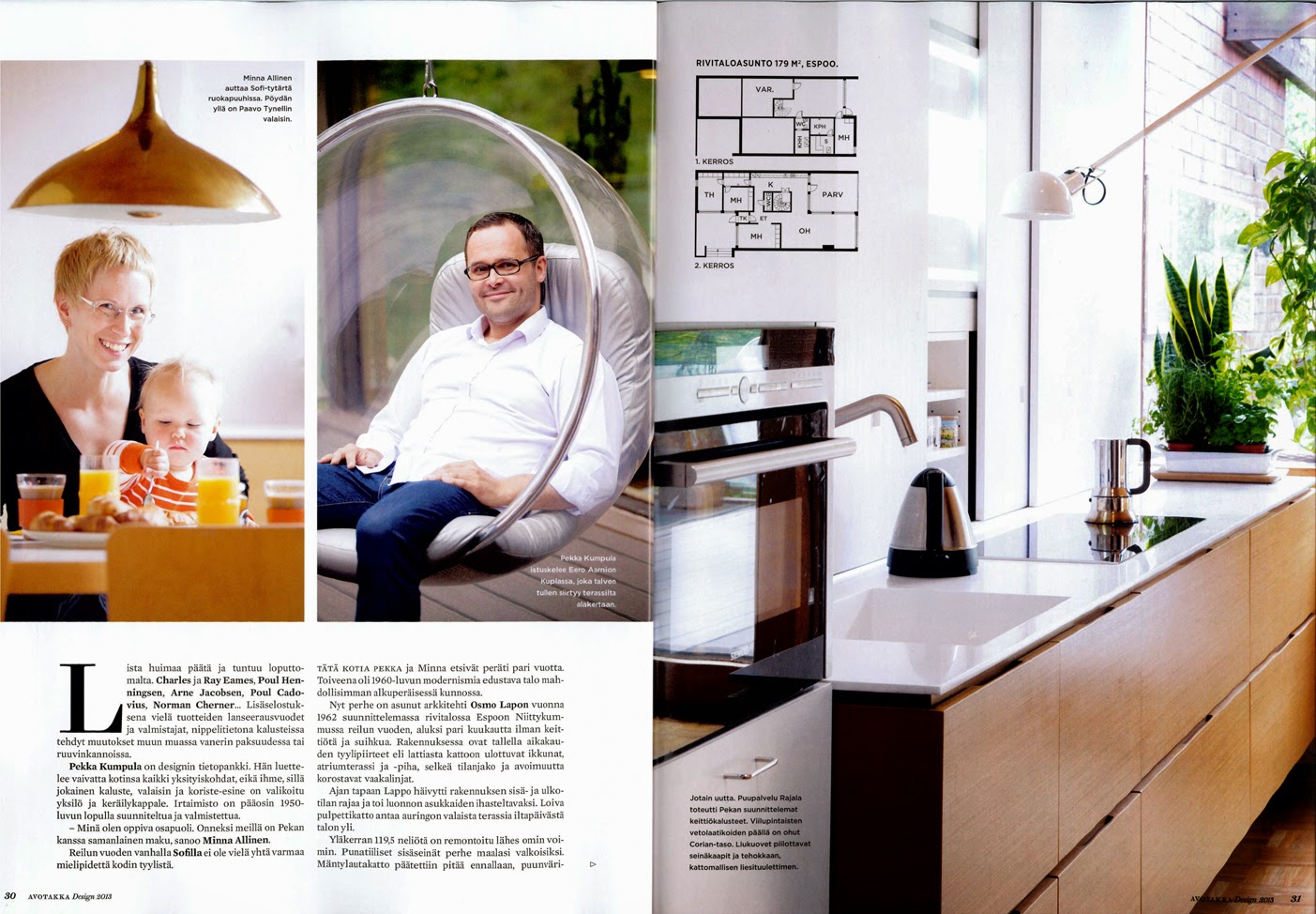 The green cabinets in the hallway were painted white.

- Cleaning, sanding, puttying and painting five times over took a lot of time, but now they look fresh, Pekka says.

The overall goal was above all a harmony.

- The structures at the entry and other darker details emphasise the light colours. The colour palette in the interior design is very earthy, but also has brighter accents such as the patterns on the sofa pillows and orange towels.

The language of design comes naturally from Pekka, as he is an industrial designer, masters of art and   the creative director and a founding partner of Seos Design, a design and research agency. Earlier, he has also worked in design agencies in Milan and Barcelona.

Minna is a sales and marketing director in pharmaceutical industry. The couple was brought together by a diving hobby, and nowadays they also share writing the Olive Green Window blog on their free time. The blog was started the same day when renovation in their new home was initiated. The inspiration for the blog name comes from a greenish decorative glass surrounding the front door.

- The blog tells the story of our home. We want to share ideas and inspiration, renovation experiences and information about the pieces of furniture and their designers, says Minna.

Even if the couple has renovated the apartment in the 1960's spirit, there is also something completely new. An old oak kitchen was disassembled and sold.

Pekka designed a streamlined set of drawers and above storage space covered by sliding doors. Due to its open location, they wanted to make the kitchen as inconspicuous as possible, so an extractor hood can also be hidden behind the doors and power sockets and electric wires are hidden in the structure.

Caption 8: The family has also wanted the decorative items and dishes to complement the spirit of their home. The Arena plates were designed by Stig Lindberg for Gustavsberg in 70's. The Eames House Bird on top of the fireplace was a gift for Pekka from Minna. 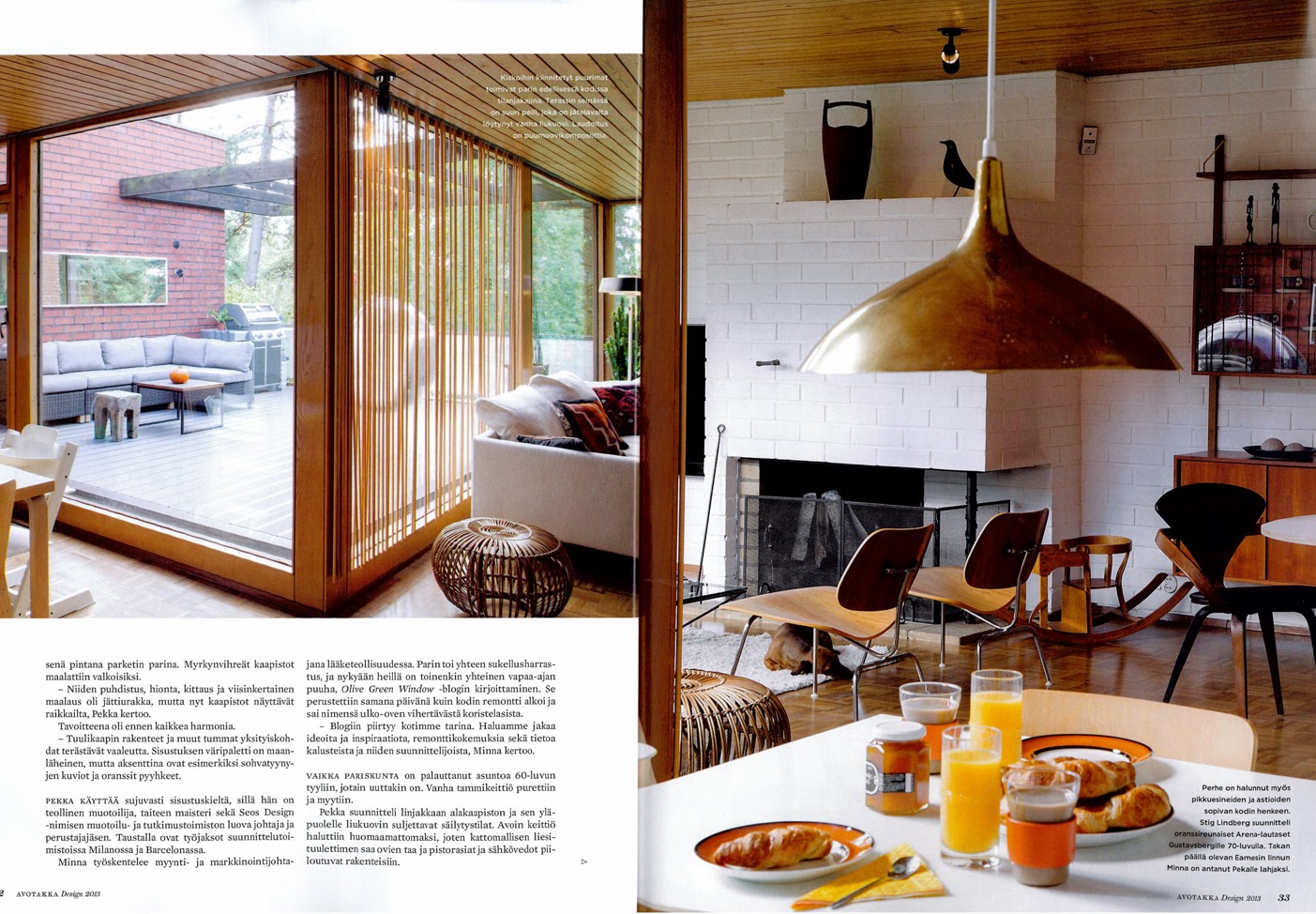 There are also other modern concessions. The Italian sofa is by Piero Lissoni and the glass table is from Paolo Piva from 1980's.

- The classics have their definitive charm. They have a clean form, are practical and made with care. Wasn't it so that the Eameses were inspired by a comfortably fitting baseball glove when designing their chair? Indeed, the lounge chair is very nice to sit in, says Pekka.

He has the third version of the Eames 670 lounge chair and 671 ottoman, which was originally launched in 1956. The current one is from the very first, small production series.

Nowadays Pekka follows international internet auctions on a daily basis. He has made purchases for example from US. His advice is to follow up closely what is available and thinking carefully, what one should pay for each item.

Pekka has a wish list, which includes 10 - 15 items. Currently Eero Saarinen's Tulip table ranks the highest. He would like to have a marble top, but Minna would prefer laminate.

In downstairs, there is dust and raw tiles and concrete. So far they have carried away 16 tons of construction waste. The washroom and laundry room, however, are already in use.

- The rest of the downstairs is a complete disaster, says Pekka.

He has overtaken one of the small rooms downstairs to serve as his workshop. In there, he conducts the restoration of the items found in auctions.

- Once I bought an Artichoke light by Poul Henningsen from an internet auction. The light smelled off nicotine and was full of dead insects. I took it a part, cleaned, painted and applied a new laquer on all the 72 metal leaves and also had the electricity fixed. Altogether, I spent 2.5 months with this particular project.

Even they are collecting interesting pieces in their home, Pekka and Minna think that everything is primarily there to be used. Even a design home can't be a museum. It needs to be able to survive the hits of the every day life and the endeavours of the dachshund Urho.

Caption 9: A home needs to be able to survive the hits of the every day life and the endeavours of the dachshund Urho.

Caption 10: In the bedroom above the teak credenza is a mirror manufactured by Swedish Luxus from the beginning of 1950's.

Caption 11: The two story townhouse has large windows and a terrace.

Caption 12: A window was build in between the bedroom and living room, and the closets were renovated.

Caption 13: The light fixture called both "cone" and "artichoke" has been designed by Poul Henningsen in 1957.

Caption 14: George Nelson designed the Spindle Clock in 1947. Currently it is manufactured by Vitra. 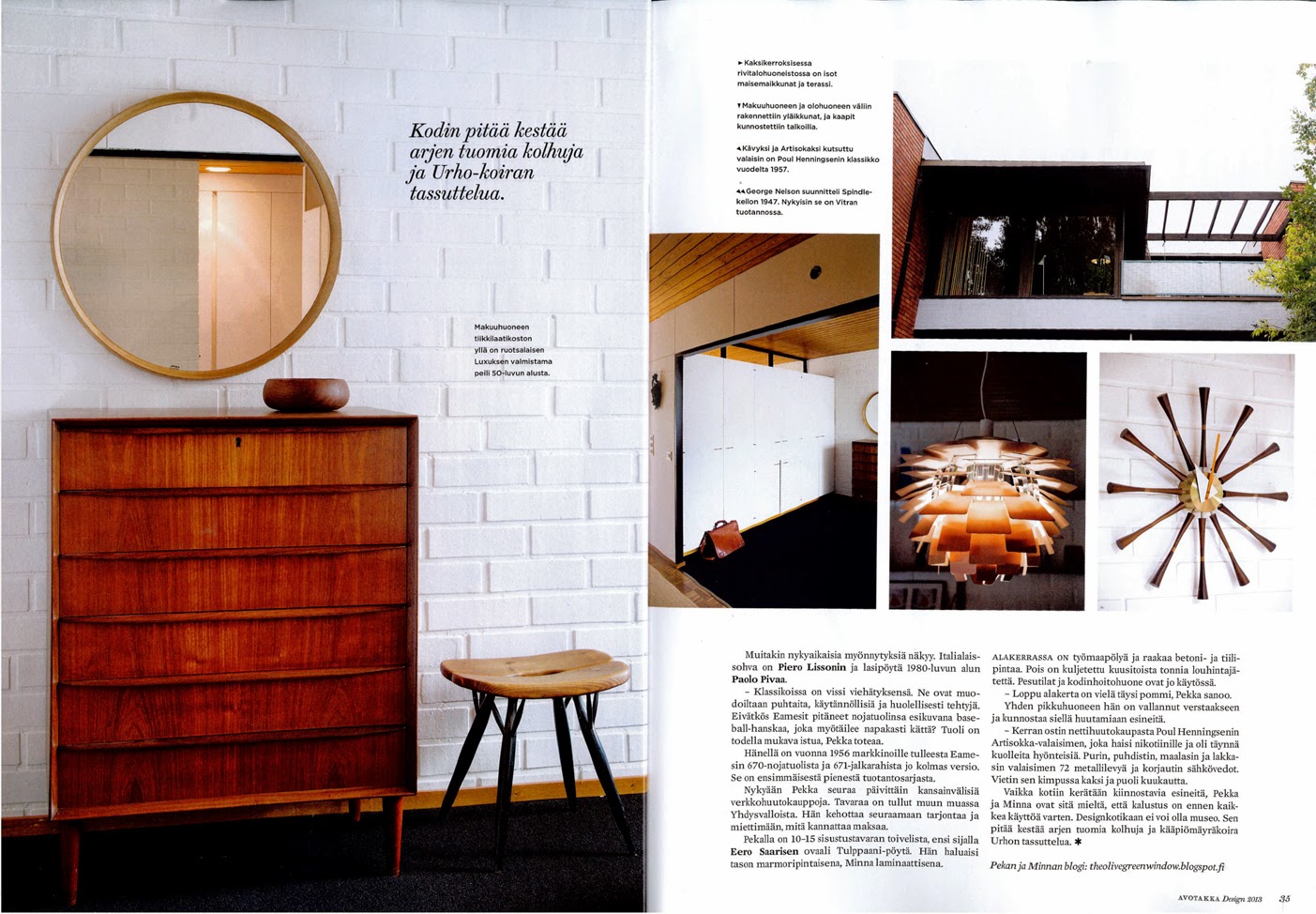