At some point when the downstairs was still a mess, we wondered how much time we'd actually spend there when finished. After all, the living room upstairs is perfectly functional, and it is not really we needed more space.

But then, Zipper arrived. We had contemplated several options in terms of couch based on quite a few criteria. First and foremost, only bright red would do. Also, it needed to endure two termites and a dachshund, and have enough room for the five of us - and definitely be a corner sofa to assume a prominent role in the room. Finally, we were looking for a very relaxed look and feel.

Eventually, the answer (i.e. a couch that met our requests) was found much closer than expected, just literally around the corner. Annaleena Hämäläinen, who is the creative director of Hakola, a Finnish furniture company, also happens to be our neighbour. She listened to our wishes and presented a perfect solution - a Red Zipper by Hakola.


We will be return to the Red Zipper soon, when showing you more of our favourite room in the entire apartment. Funny to even think we were doubting if this room would be used. Now we are wondering how we ever survived without it...
Posted by Minna & Pekka - Olive Green at 23:30 No comments:

Up until last July, the entrance to our home has not been very inviting. Once we stopped piling renovation junk on the terrace, it got a bit better. Just a bit though. On the scale from disaster to perfection, we were definitely way closer to the former.

Perhaps the biggest problem was with the old tiles. They were ugly, completely misaligned, very difficult to clean and had no decline for water to drain away (actually the level of the terrace was lower than the highest step).

Our first thought was just to reuse the old tiles. However, few more tiles would have been needed and finding similar ones both in terms of size and design proved unsuccessful. In the end, the only sensible option was to replace them all. So one by one, in one day, Pekka carried away 50 tiles each weighing about 60 kg. After that, he was able to start working with the foundation. First, organic matter was removed. Then the foundation was levelled with stone ash and pressed tightly.

At the same time we went back and forth on deciding which tiles to choose. After some consideration we finally set our minds with the Tosca by Rudus. Somehow it was modest but modern,  and allowed creativity in terms of terrace assembly.


Then the assembly work begun. First Pekka stretched a couple of lines across the terrace area to indicate correct level and decline. After that he laid the tiles one by one according to the map he made before. 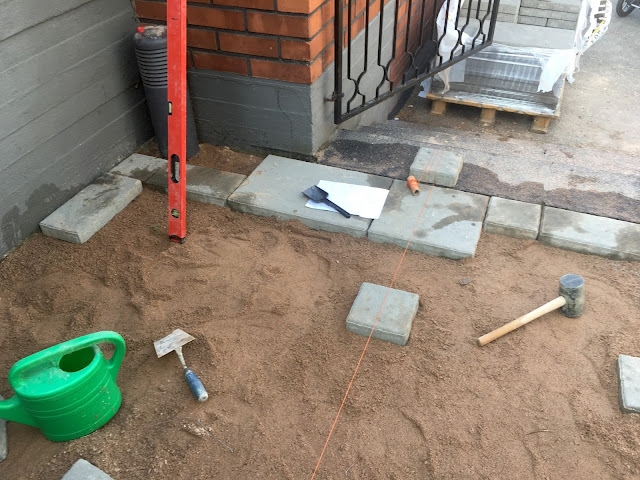 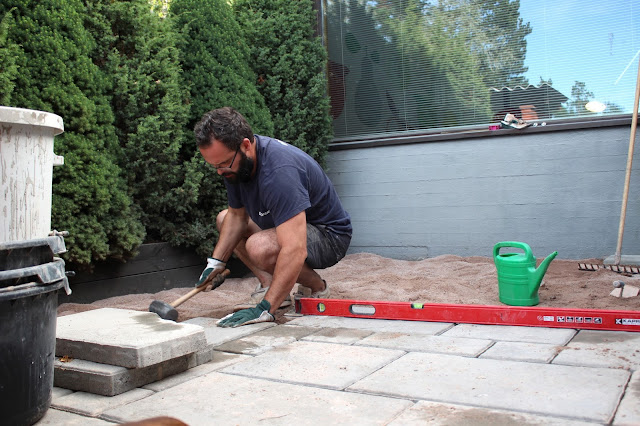 In comparison to the natural slate he had been working on the backyard, using square or rectangle tiles really was a walk in the park. Also Urho was happy. Sunbathing on a sandy surface was not quite appropriate for his high standards. Cool tiles would be much nicer.


When all the tiles were in place, Pekka seamed them first with light sand (as it is a bit more inexpensive) and finalized with black seaming sand to achieve a more defined look.

Four days later we had a new entrance. The visual improvement is of course tremendous, but it is also very nice that the water can actually flow to the direction it should be flowing - away from the walls of the building.


And what does Urho think? Well, if you are to do some watching out for unwanted visitors, be the true guardian of your realm, you need to do it with style. Who cares about watchtowers, low and levelled works perfectly for a long and lazy sausage in duty. Approved.